How Two Ladies From Twitter Got ₦300,000 From A Guy For Just Being Pretty | Gossips
News Headlines

A Twitter user, Blessing with the handle, @ikoojo__ was shocked after she received a whopping sum of 100,000 naira from a Nigerian guy within doing anything.

Blessing had also expressed her shock after another guy surprised another Twitter user, @FolaLagos with the sum of 200,000 naira.

READ ALSO  I really want to have boyfriend but I prefer dark skin, light skin are so lazy - Lady speak out

Before that, FolaLagos had taken to Twitter to appeal to her followers to send her money, because “she deserves it.”

Shocked by this act, Blessing took to her Twitter to reply Fola’s tweets with the ‘shocked’ emoji.

READ ALSO  VIDEO: Lady swears with her mum’s life to prove her undying love for her Boyfriend

Another Twitter user who had been in Blessing’s DM since 4th of January, but got no response again DM’d blessing to send her account details, to which she obliged and was sent 100,000 naira from the Twitter user. 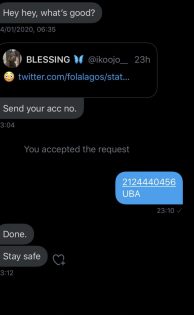 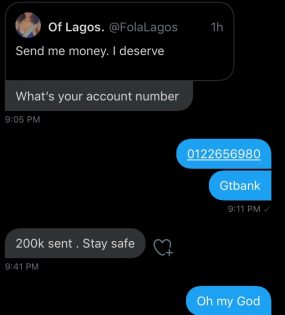 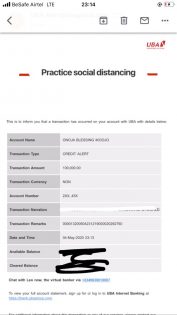 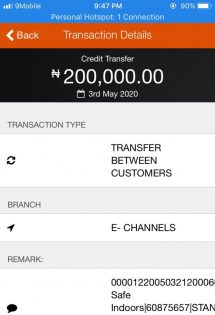 Justice Ayokunle Faji of a Federal High Court in Lagos on Monday, issued a bench warrant for the arrest and Read More

Buhari approves Sen. Abbo's request to rehabilitate Power Infrastructure and reconnect Michika, Madagali and 46 other communities to the National grid

A 24-year-old Rwandan woman, Liliane Mugabekazi who was arrested on August 7 after attending a concert wearing a sheer dress, Read More

Ondo State Governor, Rotimi Akeredolu has described Governor Yahaya Bello as one of the bad Governor Kogi State ever had. Read More

Goodmorning dear and please, thank God in every special way for my life. Yesterday evening, I was attacked with my Read More

Obaseki, Malaysia seal deal for University of Innovation in Edo

The Edo State Governor and candidate of the Peoples Democratic Party (PDP), Mr. Godwin Obaseki, has signed a deal with Read More

For few days now, Nigerian singer, Peruzzi has been in the news for very wrong reasons. He has been dragged Read More