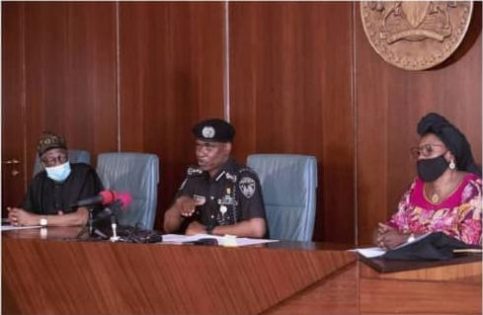 717 rape cases has been reported to the police across the country from January to May 2020, we learnt from the IGP, Mohammed Adamu.

The IGP made this revelation while speaking with state house correspondents after himself, the Minister of Women Affairs, Dame Pauline Tallen, and the Minister of Information, Lai Mohammed, met with President Buhari this morning over the increasing incidence of rape cases.

The police chief said that for the 717 cases reported, 799 suspects have been arrested so far, 631 cases conclusively investigated and charged to court, and 52 cases are left and under investigation.

He added that the COVID19 restriction is responsible for the spike in the number of rape cases.

''We are here to brief you on sexual and gender-based violence and the action that the government has been taking, particularly the Nigeria Police.

It has come to the public knowledge now that because of the COVID-19 restrictions, we have a surge in cases of rape and gender-based violence.

These are cases that are now coming up but we want to let members of the public know that, rape and gender-based violence have been there.

The Nigeria police so far from January-May 2020, we have recorded about 717 rape incidents that were reported across the country, about 799 suspects have been arrested, 631 cases conclusively investigated and charged to court and 52 cases are left and under investigation.'' he said.

Rape Video: We Will Speak On Alleged Rape Of Our Pupil Soon — Chrisland School