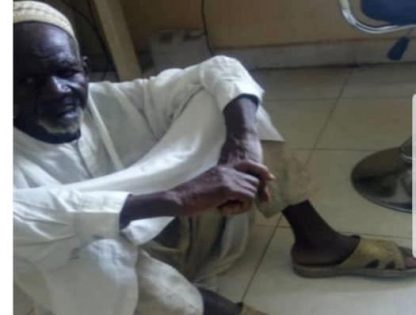 In Yobe state, an 80-year old man has been arrested for defining a 10-year old orphan.

The man who was identified as Mohammed Bara’u of Lawan Fannami ward in Gashu’a community of Yobe State was arrested for allegedly defiling a 10-year-old girl.

It was gathered that the suspect who is a wood seller had been trying to lure the girl with chocolate and finally succeeded last Sunday after asking her to pick something from his room.

He reportedly followed and forcefully had carnal knowledge of her.

He was arrested after the case was reported to the police by Bade Local Govt Shari’a Committee and some local NGOs.

Medical examination conducted on the girl who lost her parents few years ago, confirmed that she was defiled.

The old man who confessed to raping the little girl once, will be transferred to CID office in Damaturu on Friday June 19.

Kogi state is located in middle of Nigeria. The state capital is Lokoja,were River Niger and River meet, the reason Read More

The Director-General, Lagos State Safety Commission, Mr. Lanre Mojola has disclosed that the Commission is set to begin the Register-To-Open Read More

Of all the unspeakable atr0cities like k!lling, ma!ming and even beh£ading of Igbos so far carried out by the so Read More

The first law, Never Outshine Your Master was contravened by the Edo State Governor. On assumption of office, Obaseki was Read More

I get Coconut Head, I no dey hear word,” footballer Osinhem Reply adviser

Victor Osimhen has reply a man who took to his Twitter account to advise him. How it happens is that, Read More

14 Uncovered Assets, Not Mine; I Have Only N2.8m In My Bank Accounts - Abba Kyari

Young Girl denied admission into Nigerian University for being too young, gets called to the bar at 20yrs

Esther Chukwuemeka has been tagged the youngest Nigerian lawyer to be called to Bar. She was called to bar on Read More

6 Early Signs That Show You Have a Low Sperm Count

According to a publication by Mayo Clinic, decreased sperm count is the leading cause of male infertility, impacting millions of Read More

Appeal Court Judgement on Ikot Ekpene Federal Constituency and Senatorial District: An opportunity to widen the margin of victory for PDP

Justin bieber denys allegations levelled against him Popular Canadian Singer, Justin Bieber, has come out to deny the allegations of Read More

Halima Abubakar suggests castration for rapists Halima Abubakar, Nollywood actress and producer has suggested what she thinks is an appropriate Read More

By Harrison Esien, From Uyo *Awareness and assertive behavior may be your best defense against becoming an “easy target.” *Hold Read More