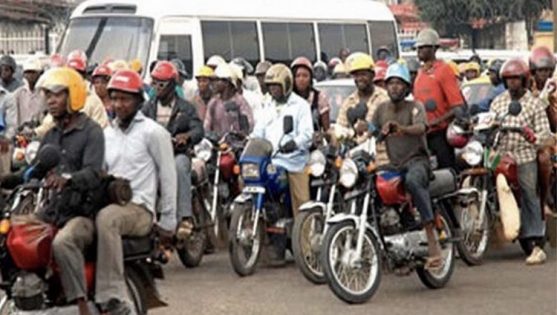 Okada riders in Ikorodu, Lagos State have protested against the constant arrest and extortion which they go through in the hands of the Police.

The protesters, who were armed with placards, chanted various solidarity songs.

We learnt that they marched to the Igbogbo police barracks and also to Ayangburen’s palace.

Some of the inscriptions on their placards were: “Police knows thieves”, “We are not thieves”, and “We use this bike to feed ourselves and our families”.⁣

Mr Tunde Muftau, the spokesman of the protesters said that since Wednesday, the police in Ikorodu had been raiding Okada riders.

He added that many commercial motorcycles have been seized in the process.

“Lagos State Government has banned us from going to the express road to work, so most of our members don’t work there anymore.⁣

Among us are some who have lost their jobs, we use this motorcycle business to sustain ourselves.⁣

Government should please listen to our plight and let us work according to their directive,” Muftau said.⁣

One of the motorcyclists, Mr Saheed Ikole, appealed to the state government to allow them work, adding that it would reduce idleness and unemployment.⁣

“The motorcycle business has helped a lot of people to put food on the table for their families,” Ikole said.⁣

Another cyclist, Mr Kehinde Ewenla, said that Ikorodu was not among the local government areas where commercial motorcycles were banned.⁣

“We are enjoying our work until yesterday when police started arresting us and seizing our bikes.⁣

Ikorodu is not listed among the local government areas where bikes were restricted, I think the police were just doing anything they like,” he said.⁣

Have you ever seen anyone make love to shoes? We wake up everyday to new cases of weird and abnormal, Read More

Covid-19: Enforcement of Restriction Orders, Give effect to those in exemption whilst - IG tell Police officers

All essential workers including Medical Personnel, Firefighters, Ambulance Services, Journalists, etc are exempted from the restriction of movement associated with Read More

Crystal Dunn is afraid that protesting will affect her career

Crystal Dunn, US Women's football team striker, has admitted that she was worried and afraid that her career would have Read More